It was originally named Castle’s Wood’s, as the land in the immediate area had once belonged to Jacob Castle, a frontiersman in the likes of Daniel Boone. Castle purchased the land from the Shawnee Indians, for very little in trade. It is reported that the purchase was made with the Shawnee Indians for a “hound dog, a knife, and a shot of whiskey. As a “Long Hunter”, he spent long periods of time in the wilderness on hunting expeditions. There, he befriended the Indians that inhabited 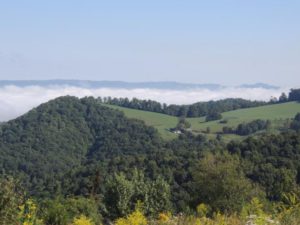 the land in the Castlewood area. He married a Shawnee maiden by the name of Gliding Swan, and they produced many children. It has been said that Castle himself showed Daniel Boone the Cumberland Gap and areas west, which led to Boone’s. expedition and settlement of said lands. Many descendants of Castle reside in Russell County, Virginia and the surrounding area. Castle’s father, Peter Cassell, was a German immigrant to Pennsylvania who was influential in the Dutch movement to America. The name was modified to Castlewood by the United States Postal Service in the late 1800s, as a simplification of the original spelling and pronunciation which was common during this time period.